I bought a new purse: black faux-leather with giant fuck-off studs covering the bottom. If I ever swing it old-lady-style at a would-be mugger, there’s gonna be some damage. This pleases me.

I realized that few things make me as irrationally enraged as door-to-door salesmen who try to trick me into opening my door with a “shave and a haircut” knock. Same guy three days in a row. ONCE WHILE I WAS NAPPING. I was the cartoon bull with steam coming out of my nostrils. No one, and I mean no one, messes with my naps. It gets ugly.

I picked up a five-year journal at Chapters, because I realized there are so many firsts in my writing career that I want to record. Like my first 5-star review! I have so many plans for my career, and I think it will be neat to compare what’s happening this year to what happens the next, and the next… 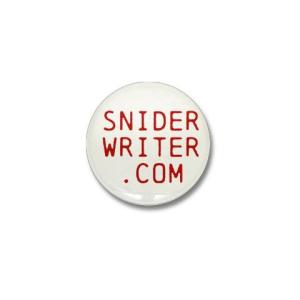 Not in a snobby, pretentious, too-good-for-such-frivolity kind of way, where you tell everyone ever that you don’t watch it in order to sound more interesting and clever. More in the sense that DayJob, which is also sometimes AfternoonJob and even NightJob, hampers any sort of consistent schedule. I’m simply not always home at the same time, so I don’t catch shows with any kind of regularity.

And yes, I know about PVR. And I’m too cheap to buy one.

So, enter Netflix. I’ve wanted it forever, since it neatly solves this little dilemma. We finally cracked about a month ago and set it up.

Oh sweet merciful crap. All those box sets I wanted? Right there. Cheesy, campy horror movies at my beck and call? Ditto. I don’t waste time cursing terrible buffers or trying desperately to stream a show from a website with cramped bandwidth. I press play and it’s there.

The thing with working on an art career is that you have to cram as much work in as you can, around the confines of day jobs and family and scant nutritional intake. You need to wake up early, or stay up late, chasing your Muses down and pinning them until they squeak out ideas. You need to love your desk, since you’ll be there for hours. That’s the idea, anyway.

But now that my desk is in our living room, the siren song of the bigscreen is almost too much to bear. I have all the Charmed you could ever watch, it says. Come watch Pumpkinhead for the hundredth time. Then the couch gets in on the act, reminding me that I have a wonderfully comfortable pillow and blanket awaiting me, and maybe I could just relax for half an hour.

Which becomes an hour.

Lame as it is, it looks like I need to start scheduling blocks of tv watching for myself. Scheduling time and sticking to it. I’m not getting anywhere being tethered to this remote.

But the couch really is comfy. And they have the whole series of Alfred Hitchcock Presents…

I think I’m in trouble here.

This week I got caught up in the wonder that is Netflix. I had some help getting comfy on the couch: 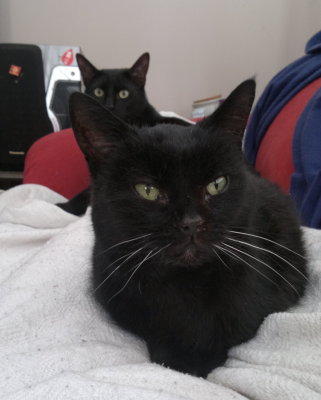 That’s Jadie in the front and Zoey in the back.

I set up my beautiful new desk.

I watched Rubber, which was nothing short of brilliant. 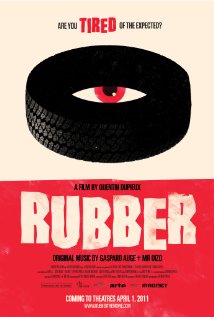 From IMDB: “When Robert, a tire, discovers his destructive telepathic powers, he soon sets his sights on a desert town; in particular, a mysterious woman becomes his obsession.” I mean, really. You’ve gotta give it a chance: It’s so much better and much more clever than you’d think. Plus, the gore effects are AWESOME.

I’m still reading The Fountainhead, and just made it past That One Scene That Everyone Talks About. Say what you want about Rand’s heavy-handed philosophy: I’m enjoying reading about architecture, which is not what I expected.

And my husband reminded me of this video, which is filthy, but makes me giggle uncontrollably. You have been warned.

Like I said, spoilers ahead. SO MANY SPOILERS. Fair warning.

I had tried to avoid even watching the new versions of the trailer, because I hate going to a horror movie where all the scares are used up. Turned out that was completely unnecessary. There’s so much more to Mama.

So, we start with a distraught, suicidal father trying to kill his kids in the woods. No worry, Mama steps in to take him out, and from then on she adopts these little girls as her own. When they come back out of the woods, so does she. And she’s a very, very jealous parent.

There was a lot I didn’t expect from this movie. I liked seeing a female lead who’s “different”: tattooed, shacked-up, and not into the mother thing. Sure, the actress’s tattoos were probably fake, and she ends up ditching her Misfits t-shirt for a motherly turtleneck (REALLY?!) but still, it was a welcome change. I liked her impersonal interaction with the kids, though of course she warms to them in the end.

The jump scares were decent, too, and evolved from Mama being nothing but a shadow to having a horrible, twisted face. Her movements were disturbing; she died broken, and it shows. When she bent clear in half, backwards, the little hairs on my neck stood up. She scuttles like a cockroach, which never fails to be startling.

The kids were excellent. Lilly, especially. Her portrayal of a feral child was impressive, and her utter fixation on Mama and her artifacts had me believing.

My favourite part? ONE KID DIES. When do you see that? When? I expected Uncle Lucas to die. I expected Annabelle, his girlfriend, to die. I almost expected both kids to die. But when Victoria refuses to go over the cliff with Mama, I thought for sure Lilly would stay with her. It turns out Lilly’s love for Mama trumps even the love she has for her sister, and she goes willingly into Mama’s arms one last time. That scene was unbelievable, in the realest sense: I thought it was trickery. I thought it was a “gotcha”, that Mama would fly back up at the last moment and drop Lilly unharmed into the arms of her family. NOPE. DEAD KID. WHAMMO.

And yet, I felt pity for Mama. She really wasn’t a monster, she was confused and heartbroken and yearning. Another twist I didn’t expect.

From the atmosphere, to the casting, to the creepy monster design, everything worked together. Del Toro did it again. Go see it.

One of my favourite things about blogging is finding new content. Most of it is as new to me as (I hope) it is to you, which means I get to discover new things all the time.

I don’t remember the last time I saw a film so flawless. I loved EVERYTHING about this: the casting, the makeup, the set, and of course the story. I wouldn’t change a single thing.

I hope you love it as much as I do.

(note: the film has been entered in the Driven Creativity Competition. If you enjoyed it, please vote; I’d love to see more from these folks! I am not in any way affiliated with this movie, other than being an instant fan.)

Turn your volume way, way down for this one.

What I wouldn’t give to have seen her reaction during the actual movie.

ZZZZOMBIES from David King on Vimeo.

This one made me actually laugh out loud. In the living room. By myself. Which is weird, and made me feel like a dork. But I loved it, and I think you will too.

It seems to be Stephen King week here at SniderWriter…just this last one, promise. I loved this review of Christine by Leslie at I Know I’m Not Normal Because… 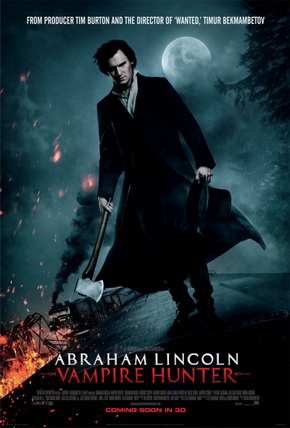 I expected to hate this movie. I’d borrowed the book from my friend Leslie (she of I Know I’m Not Normal Because…, review is here) and struggled through the first…third?…before I gave up. I didn’t like it. It wasn’t interesting. It was too much blah blah and not enough action or suspense. Therefore, this review is about the movie only, which Leslie tells me is nothing like the book.

If you’re going to see this one, go into it with an open mind. (I mean, you have to be at least a little willing to suspend your disbelief; a President slaughtering vampires? Hokay.) But I mean really open your mind. This movie is wild, and over the top, and funny in a possibly unintentional way. It reminds me of Drag Me to Hell in that if you’re expecting scary, you’re out of luck. If you’re expecting to be entertained, you’ll have fun.

Super-quick summary: go see it, in 3D, before it’s out of theatres. The spoilers start below:

Abraham Lincoln is a total badass who spins his axe like a karate bow staff. He started picking off the vampires, blah blah, and I started to think it was going to be nothing but hack-and-slash. At one point his axe is revealed to be both a gun and a knife. (Really??)

Then it got pretty.

The movie is wonderful to look at, even in its most bizarre scenes. There’s a LOT of CGI. Sometimes it gets crazy, like a chase scene where we see Lincoln hopping Frogger-style across the backs of stampeding horses. And there’s a few too many slo-mo fight-scene Matrix backbends. But it’s also used subtly, and beautifully, as with the falling embers and the vampires’ reflective eyes.

The costumes are incredible: if I thought I could get away with wearing 1800’s period dresses I would be all over it. I especially loved Mary’s mourning dress, as seen at the dinner table with Lincoln. Not only would I wear the clothes, they would give me an excuse to knit a shawl like I’ve always wanted.

The sets looked fantastic, especially the burning train trestle and Lincoln’s office at the White House.

Standouts: THE VAMPIRES! They looked quite a bit different than your standard vamps: when they attack, they’re almost demonic in appearance. And the effects when a person has been bitten are impressive (you can see the veins pulsing beneath the skin). I also appreciated that the actors were able to speak normally with fangs in; none of the mushy mouth you usually get with vampire movies.

Watch out for: the bad 80’s riffs on the soundtrack to the fight after the ball, the axe-gun-knife, the flawless projection of a child’s tiny metal sword when fired from a gun, and Henry’s ability to hold up entire train cars without ripping his arms off. There are some plot gaps, too: Lincoln attacking Henry for lying about being a vampire (uh, no he didn’t) and Mary blaming Lincoln for hiding the whole vampire thing from him (nah, he told her right to her face).

Still? It grew on me. I really, truly liked it. Even if there were only three of us in the theatre. 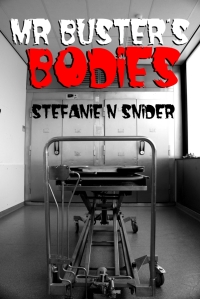 My pal Leslie over at I Know I’m Not Normal Because… posted a review of my short horror story, Mr Buster’s Bodies, today.

“Mr. Buster, always “Mr” never “Jim” and never ever just “Buster” as the story will tell you, is an exceedingly well crafted character. His scheming and treachery will have you wrapped up in his twisted mind, start to finish.”

Continue reading at her new blog, then snoop around over there for a bit. She’s a funny girl.