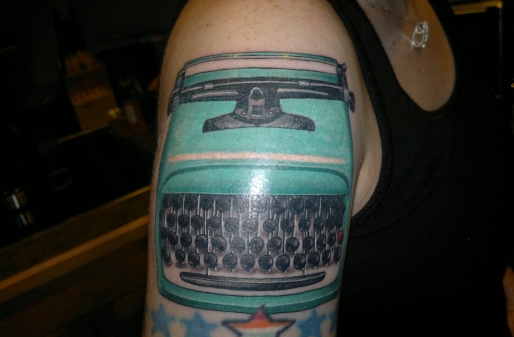 I have a new love. This is an Olivetti Studio 44, from the fifties. It types in cursive! I modified the colour to make it brighter; check out the photos at Classic Bride to see the real deal.

And no, it’s probably not the same model, but Stephen King (one of my writing heroes) says this:
“Tabby claims that I married her for a typewriter. She had a nice little Olivetti, portable typewriter, very sturdy and I wrote Carrie on it, Blaze and a bunch of other stuff as well. I guess I wrote Shawshank on that typewriter too, on a kitchen table in Boulder…” (source)

I also got another tattoo, but you’ll have to wait until I can get a better picture of it. (Ooooh, suspense!)