I spent the week with that nasty, chesty cough that’s going around. The one that makes you feel like your own lungs are trying to drown you, and your head isn’t far behind. I stayed home from work for two days, thinking I’d take it easy, maybe get a little writing done from the comfort of the sickbed. Instead I laid on the couch whining like a four year old while C patiently brought me food and drink. (In retrospect, I tended to sleep right after that: he may have been slipping me cold meds to make me shut the hell up. Frankly, I wouldn’t have blamed him.)

I read quite a bit, curled in a bitchy little ball in my bed, including Bentley Little’s His Father’s Son, the ending of which I predicted but loved just the same. It gave me fevered clown dreams, though, which were more terrifying than the book itself.

I decided to get a desk. A real, proper, writerly desk that weighs a ton and is beat to hell and back. I want something wooden, something substantial, something I can use as I pen stories and novels for years to come. Pen being the operative, here: my current setup isn’t cutting it. Writing longhand at a rickety chrome-and-formica table makes the whole works shake until I worry that it’ll all fall apart, severing my legs on the way to the floor. I went thrifting with my friend Leslie in hopes of finding a big wooden behemoth to call my own.
Somehow I came home with this instead: 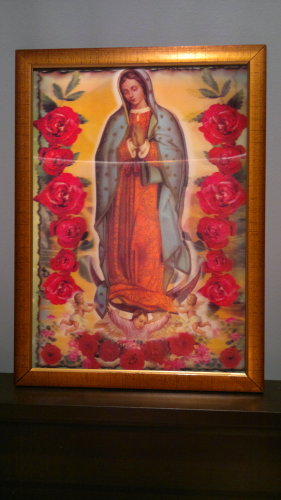 That white horizontal line is the light catching her grooves. She’s lenticular and turns her head when you walk past her. Have you ever seen such splendor? Not for a dollar, you haven’t. I have the feeling she’ll be coming to live in my office.

3 thoughts on “This Week in Sniderville: 3”