There’s something about them that makes me uneasy. They’re so…thick. Substantial. Meaty. Imagine scuba diving and looking down and seeing that big green monster right below you.

But that’s not the half of it. 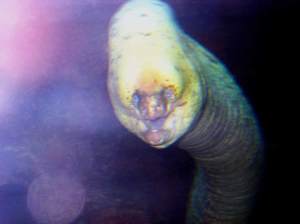 both images from Gamestop.com

The “eyes” of the humanoid face you’re seeing are actually its nostrils, but that doesn’t make it any less creepy. Also? The green moray eel, pictured here, has two full sets of  jaws. Due to their bite mechanism,  “…the eel cannot release its grip even in death and must be manually pried off.”

See it in action below, and ask yourself why you ever thought it was a good idea to go into the ocean.