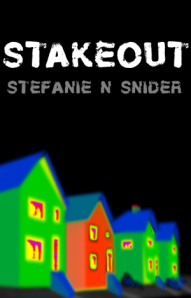 “Partners Garrick and Ortega are assigned the stakeout of a suspicious house, using a thermal imaging camera. But when the equipment picks up a strange presence nearby, their mission takes a dark turn.”

“Holy shit, Eric, lookit this! Eric!”
“What?”
“Seriously, check it out. Number 126.”
“We’re supposed to be watching 124.”
“Yeah, yeah, whatever. Dude, just look.”
“Quit calling me ‘dude’.” Garrick snatched the thermal scanner out of Ortega’s hand. “What am I looking at, exactly?”
“Heh. You’ll know.” Ortega leaned his seat back so Garrick could aim the thermal past him. Its screen changed colours as he traced the house across the street.
“Which one’s which, again?”
A small wisp passed over the screen as Ortega exhaled loudly. “I told you. Red is hot, blue’s cold. It’s not hard. You shoulda been paying attention in training.”
“Right. Well, us big boys sometimes have other things on our minds.” He twisted the gold band on his finger and thought about belting the kid, just once. “You keep your eyes on 124 while I’m looking at…whatever you find so interesting.”
“Uh-huh. I’ll let you know if I notice a nice man carrying a bushel of marijuana over his shoulder… See it yet?”
Garrick had traced the front bushes and first floor of the house: nothing but faint glimmers from the electricity in the walls. Now he raised the machine, sweeping back and forth as they’d been trained. Paid attention to something, you little shit, he thought. The screen reddened slightly as he aimed the imager up the stairs and past a warm room — a bathroom, someone probably had a shower — then at once the screen blazed with colour. There was movement, repetitive and rhythmic. “What the hell?” It was something living, for sure, but it was much bigger than a person…

Available now at Amazon and Smashwords, and soon on iTunes and B&N!